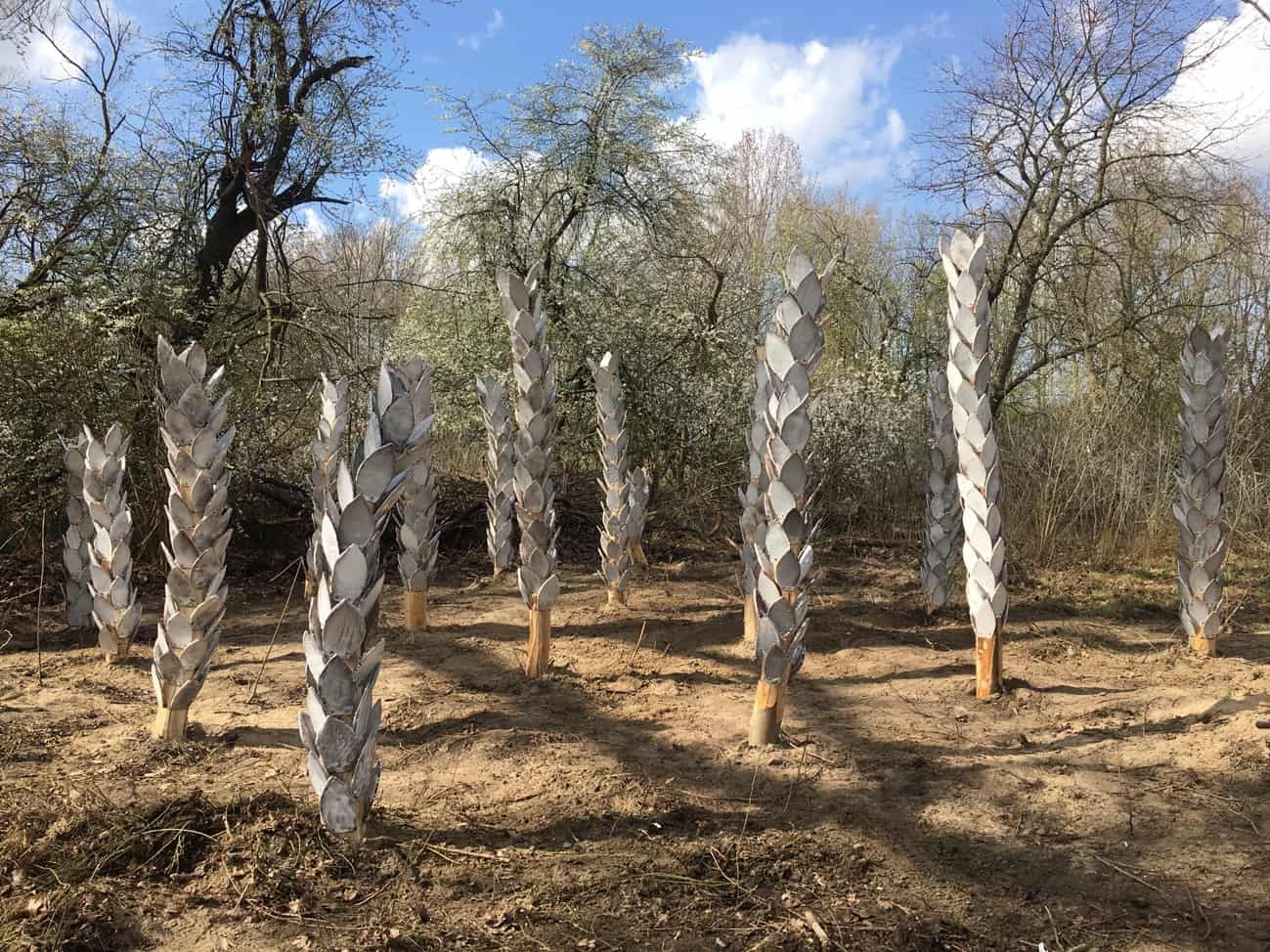 For the final presentation of her residency at the Waterwerken art project at Buitenplaats Brienenoord, Elen Braga ponders the notion of water as a fluid connector of stories scattered around the globe. In Zand Erover Braga presents a set of new works made with resources from the site. She departs from language to build on the local sphere, its correlation to distant places and days gone by. Literally meaning to cover something with sand, Zand Erover is a Dutch idiom equivalent to the English water under the bridge. It means something as let’s forget about it. While the similarities of sense between the two expressions are clear, each phrase’s particularities imply a different approach to the past. If water carries an idea of flux, the image of putting sand over something conveys the notion of occlusion. In one case, the past actually passes. It goes away. On the other, it lays buried in the territory as an excavation shut with sand.

Braga investigated the terrain, the history and the materials from Van Brienenoord since her arrival to the island. She would constantly question how to make acquaintance to the place without referring to vocabulary choices that would imply a colonizing attitude. Discover, explore, inquire: words heavily loaded with a historical sense that also embed specific approaches to the land’s natural resources. Language intrigued Braga in its relations to several levels of power. She remembered the lines of Portuguese writer Helberto Helder who once wrote the Netherlands were slowly lifted from concrete, an ever-growing country conquered to the waters. The idea to conquer land to the water evokes great building efforts and modern technology, as in the construction of dams and land reclamation. Putting human control over nature at stake, Braga aimed to expand the reach of the idiomatic saying Zand Erover adding multifold nuances to it.

Interested in the confluence of the big and the small sides of history, Braga decided to undertake an inquiry on local minutiae, researching the island’s natural resources, such as clay. Together with a pottery artist from Rotterdam, she studied the Dutch porcelain tradition and the possibility of making ceramics with clay coming from Van Brienenoord’s soil. One day at the studio, she noticed a small plate hanging on the wall where one could read “Schep Vreugde in Het Leven”: create joy in life. Illegible symbols surrounded the text, supposed to have been copied from Chinese porcelain. The symbols had survived different contexts, and even though impossible to decipher, they told a story while borrowing an exquisite touch to the Dutch-made object.

Opening Zand Erover, a series of round hand-tufted textile works presents Braga’s own versions of newly updated plates. Made as tapestry, they are blue and white as the most traditional Delftware. Much like the Chinese symbols copied to the Dutch-made plate she found in the studio, they tell histories against the grain, carrying personal impressions and also stories normally untold – either because they embarrass us or because we forgot about them. One of these stories might be precisely how Dutch porcelain was a technology once imported from China, a knowledge that passed through the Portuguese and landed in the Netherlands via the winding paths of intense maritime trade networks and piracy. In one of the hand-tufted plates, the word offshoring substitutes the motto of a joyful life. The financial strategy of offshoring resources appears as a displaced vocabulary choice to speak of stories of migrations over the globe. Here, the word operates on the scale of individuals, instead of as a practice solely related to business and big financial movements. It conveys the idea of cyclic movements of goods and labor force – paperless immigration and brain drain – as some of the complex consequences to conquering land and markets abroad. Another textile depicts a Teflon pan throwing hot water on people. It refers to the recent scandals involving Prime Minister Mark Rutte (aka Teflon Mark) and his cabinet.

The Teflon pan reappears in an outdoor installation in which a gas-lit cooktop boils Brazilian seawater. The liquid was collected as ballast water from seagoing vessels. In Rotterdam it the tropical water is used to fill seawater aquariums in the Blijdorp Zoo. The boiling liquid refers to the battle of Tejucupapo, a historical event little known to Dutch audiences that took place in 1646, in the frame of the second Dutch attempt to establish a colony in Brazil. The decisive factor for the victory of the Portuguese-Brazilian forces was the participation of women in the battle. While men were divided, looking for the Dutch invaders in the woods, women reacted to the offensive with materials at their reach. They attacked their opponents throwing stones, boiling water and hot pepper. In the installation, the boiling water creates a sense of haste, of entropy. It dissipates into the atmosphere, much like the stories we stop telling ourselves disappear eventually.

Some steps ahead, the piece of land at the back of Buitenplaats Brienenoord is reforested by a collection of white palm-like trees. The trees respond to some of Braga’s observations on the island’s vegetation, nowadays mainly composed of populus and willows, two invasive species whose roots can extend for up to 40 meters in search of moisture. The island’s native vegetation is gone, having either burned to produce heat or being removed during WWII to be used as Rommel’s asparagus, preventing aircraft from landing on the field. The tree trunks of Braga’s palm-tree reforestation were found discarded in the island, while their leaves were made from local clay collected by the artist. Together with volunteers, Braga produced more than 1.000 leaves in total during her residency at Waterwerken.

The gesture to reforest Van Brienenoord with white palm-trees tackles the issue of exoticism with a certain ambiguity embedded in the idea of tropicalizing the northern island. The shape of the trees was inspired by a depiction in a painting by Albert Eckhout, one of the Dutch artists brought by Johan Maurits van Nassau during the occupation of the Brazilian northeast coast by the Dutch West India Company. The white color of the leaves plays an important role in the installation. The ceramic glaze coloring the leaves is made in cold porcelain, a cheaper substitute in resin for ceramic porcelain commonly used as floor coat in the south. Braga sees this choice as an option for the crystallized, the synthesized, the denaturalized. Delving on the idea of an essence that has been lost for a long time, Braga literally turned and a mixed the materials stuffed below the soil’s surface, bringing it back in the making of a new forest even though it might already have seemed like water under the bridge.

Installation with clay, tree trunks found in the island, resin

Waterwerken is made possible with the generous support of:

Time, times. Half a time