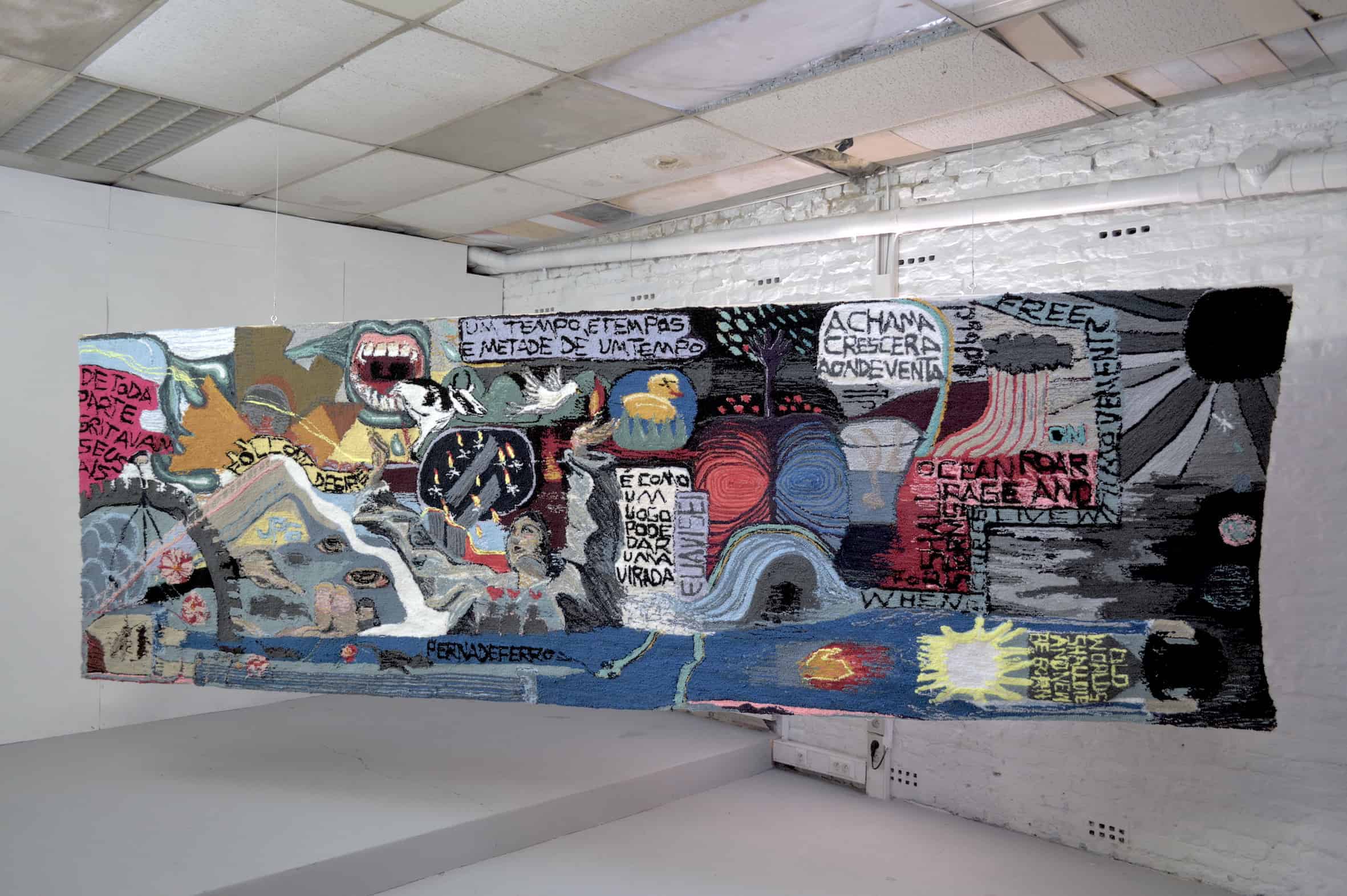 Time, times. Half a time

Time, times. Half a time
An exhibition by Elen Braga
Curator: Laila Melchior

At the end of a much challenging 2020, Time, times. Half a time welcomes the new year of 2021 with an open invitation to conjecture on personal and collective futures.

Organized in the artist’s soon-to-be-demolished studio, the exhibition affirms this space for one last time before it disappears, blending into the city’s newly gentrified areas. A gesture of resistance, the show invites the community to imagine the future together at the dawn of the new year, a shared marker of time that makes symbolic room for change and renewed hope.

Elen Braga’s practice is heavily informed by her upbringing in the heart of an evangelical community in Brazil. In Time, times. Half a time, Braga ruminates on femininity and the traces of her religious rearing through new textile and video works. The exhibition presents a collection of secular prophecies establishing lines of dialogue and disruption to the mythologies embedded in the Christian tradition. In the midst of the second lockdown provoked by the Covid-19 outbreaks of 2020, Braga sets herself the challenge to figure the nebulous coming times and inescapably reproduces images of the present in projections of the future. From Art History to Pop Culture and beyond, references emerge blending into one another. Nevertheless, the feminine body appears as a constant motif. Performing as an image to the camera, pictured in the tapestries or actively hand-tufting the textiles, it remains malleable as the disputed subject of fulfillment for the inexorably fabricated predictions.

Prophecies (2020) is a 4.20 meters-long hand-tufted textile. Hanging from the main room ceiling, it is a hypnotic visual spasm assembling figurative miscellanea from various provenances, including sayings by Brazilian mass-media fortune-tellers, predictions associated with the Bible’s prophets, memes, and high-brow literary references. At the lower part of the work, an elongated body is depicted in a blue jumpsuit holding a weight over its head. Horizontally arranged, the icon is a self-portrait of the artist that previously appeared in Elen ou Hubris (2020), a monumental hand-tufted vertical piece which Braga ambitiously displayed at the Arcades du Cinquantenaire, in Brussels, in March 2020. Switching from the vertical to the horizontal axis, the artist’s portrait slides from the role of a representation to that of a time marker, organizing the overwhelming diversity of visual input of the work in a sequence and therefore implying the idea of a beginning and an end.

The theological notion of eschatology is key to the work, as Braga draws from the imagery of Clarence Larkin, a 19th-century architect, engineer and pastor of the Baptist church who created charts and other schemata to help the faithful visualize ‘God’s plan and purpose in the ages.’ Larkin influenced the protestant visual culture showing the events of the Apocalypse as they unwind in the Bible. One of his most popular diagrams pictures a multi-metal statue of a giant. With its head made of gold, arms and chest made of silver, belly and thighs made of bronze, legs made of iron, and the feet made of a mix of iron and baked clay, this image is said to have been a revelation by Daniel, the prophet. According to the Book of Daniel, the statue represented a timeline from his time towards the end of the world. Each part of the multi- metal figure would symbolize a kingdom that would be destroyed and replaced one by another. The dream would end with a mystic stone that, coming from the sky, would crush the base of the statue and demolish it, establishing the end of the world and the kingdom of God.

While repeating the schematizing logic of Larkin’s diagrams, Elen Braga’s Prophecies substitutes the male giant figure by the artist’s body in a blue jumpsuit, marking the personal nature of a timeline that mixes historical, political and personal events as entangled conjectures for the future. The political and individual spheres blend into each other, making it difficult to pin-point discrete events. What one sees here is rather a general picture, a framework, a plane of immanence of a future that cannot prescind the present of its making. Among its many references, the work alludes to Brazilian politics as in the figure of a green monster that throws up a cow, heralded by a dove and the rubber duck that epitomizes President Rousseff’s impeachment. Whereas the cow makes a clear reference to animal husbandry as one of the country’s main economic activities, cattle also stands, in slang, for the acritical mobs voting for populist candidates in a landscape of skepticism left by the impeachment. Between one and the other, the dove alludes to religion, hinting particularly at the evangelical church as a set of institutions that are growing in its ecclesiastical power in Brazil while also accumulating political forces despite the constitutional claims of a laic State. In the center of the composition, a reference to El Greco’s Opening of the Fifth Seal (1608 – 1614), a painting made for the church of Saint John the Baptist in the surroundings of the Spanish town of Toledo, is in direct dialogue to the several political references of the work. El Greco painted the martyrs cry for the justice of God upon those who persecuted them on Earth as described in the Apocalypse. In Braga’s work, Saint John the Baptist is transformed into a woman who announces the Apocalypse of broken twin towers on fire in front of an audience of haters.

In the same room as the Prophecies, two video works extend the reflections ignited by the hanging textile. In the front-side of the tapestry, The balance may stand – the balance may
fall (2020) results of a collaboration with the immediate community of artists with whom Braga is in intense exchange, both in the Benelux context and in Brazil. The work seeks for secular oracles to flee the fate of a future fabricated by a single individual. Having asked her peers for contributions of their expectations to the coming times, Braga jumps into their inputs and scratches its surface. The doomed graphic world she presents us with makes one think of Clarence Larkin’s diagrams viewed as topography. The work’s title refers to ‘The Longest Journey,’ an interactive videogame in which the player character is an art student tasked with restoring the balance between two parallel worlds. Behind the tapestry, ‘I’m in love with my future’ draws its title from a 2020 song from north-American singer Billie Eilish. The video-clip syntax highlighted by the reference to Eilish’s music, the artist’s sensual poses, and the high- speed of the editing contrasts with a goopy, amorphous substance that lies over Braga’s body, offering an insightful take on the prospects of the future.

A threshold to a second room is marked with the message Vai Piorar (2020) in hand-tufted textile. Translating to English as ‘It will get worse’, the inscription is a saying, a rumor and a meme, a kind of a playful curse professed in contemporary Brazil in a landscape of doubtfulness, mistrust in politics and general lack of hope. A similar inscription reads Higher probability for no deal than deal (2020) in the main exhibition room threshold. Referring to Brexit only a few minutes away from the Brussels Cartier European, where the deal was negotiated for almost four years, the inscription could have its meaning extended to a vast array of other situations.

The second exhibition room shows two video works in dialogue. Thinking topologically, Braga plays building sense through the operation of adding or removing layers from video images. In Bloody Flux, the artist plays a VHS of her 15th birthday while painting the frame of the tube television in which we watch it. The heavily edited video and sound effects of the original VHS are accompanied by a declamation reflecting on the passage of time and the expectations for a faithful young woman’s coming of age. As the television gets more evenly painted, a mutating and fluid genital area pops up to the eyes. Crowds of women appear in pink and white, in a visual-effect trick obtained through color keying. A woman yells, preaching God’s will, her voice concurring with the voice-off until the preaching scene takes over and the loop restarts. The play with adding and removing layers continues with O buraco é fundo, acabou- se o mundo – a title that translates as The hole is deep, the world is over. In this video piece Braga breaks a wooden wall to find her image wearing a blue cape with green spots that looks like the Earth. It takes a long time to accomplish the task of opening the hole in the wall. when we finally get there, the performance of the world is almost over, as the cape is heavy and she can no longer hold the pose. Installed in a wooden wall, the work plays with the idea of breaking a layer that, nevertheless, stands still.

For A Brief Eternity (group show)