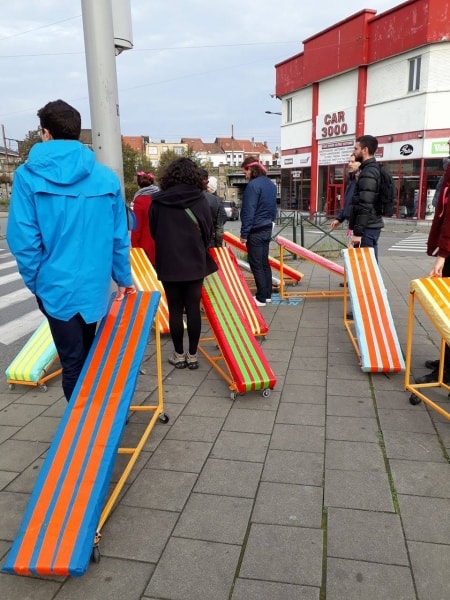 A Journey to the unpromised land and the magic balls, 2017
Performance: 2h
Anderlecht, Belgium
A performance “THE MASTERS MEETING: A Journey to the unpromised land and the magic balls” é uma excursão onde a artista convida os participantes para uma caminhada pelo canal de Anderlecht, na Bélgica. 14 “carros de mão” foram feitos pela própria artista, e fazem parte da ação, como objeto a ser manobrado por cada participante. Feitos de metal, esponja, rodinhas e fitas adesivas, os “carros” foram pensados de forma a ser um objeto “difícil” e inconfortável. A excursão possui algumas paradas, e a artista se apresenta como contadora de histórias convidando também os participantes para um leitura coletiva de um texto onde sugere uma nova versão da origem do mundo. O texto é um misto de poesia, mitologia, filosofia e os desejos da artista no processo do fazer da obra. E em meio a monstros, cavaleiros e bolas mágicas, a jornada circula em torno de si mesma, sem um ponto final a ser alcançado.
The performance “THE MASTERS MEETING: A Journey to the unpromised land and the magic balls”  took the shape of an excursion where the artist invited participants for a walk along the canal of Anderlecht, Belgium. 14 “hand cars” were made by the artist, and played a role in the action, that of an object to be maneuvered by each participant. Made of metal, sponge, wheels and adhesive tapes, the “cars” were conceived to be a “difficult” and “uncomfortable” object. Along the way, the artist stopped the group and presented herself as a storyteller also inviting participants to engage in a collective reading of a new version of the creation myth. The text was a mixture of poetry, mythology, philosophy and the desires the artist confronted throughout this art-making process. Amid monsters, knights and magic balls, the journey revolved around itself, with no end in sight.

“- You shine through my atmosphere. And when you show up, my mountains move like bushes in the wind, and rocks are scattered on all sides. I hear you. I hear an amazing bang like a storm to come. I hear the noise of thunder, the voice of demons, the winds, the monsters. The whole earth rises, dilating like the waves of the sea and my surface breaks down. My own ground seems to subside and… we need to find another ground to walk on”… (excerpt from a text read on the excursion)”

I see people walking next to the canal. Going toward an unknown place with unknown luggage. They do not know where they are, how they are, what they are carrying with them. Bags, cars. They do not resist. One after the one, two after two. They keep going on a sunny grey day, covered in warm cloth, pulling objects behind them, fighting with them to move, pushing them, pulling them again, sitting on them. They walk usually but still slow. Walking to arrive? Walking to walk?
Exodus − people trying hard to move on, getting stuck by their objects, /cars/bags. Their eyes searching away. Leaded by a “silver star”, speaking about a promised land.
Believing? Believing to reach there? Willing? Willing to go for it?
Their car-bags seem to get more and heavier. Three of them are always the last.
They go, keep going and suddenly they are coming back again. Going to find a promised land but going in circles.
Did they find it in between? Are they still on their walk? Would they arrive? Would they give up at a certain moment? Let`s ask Sisyphus and Don Quichotte … cause guess they are still going.”