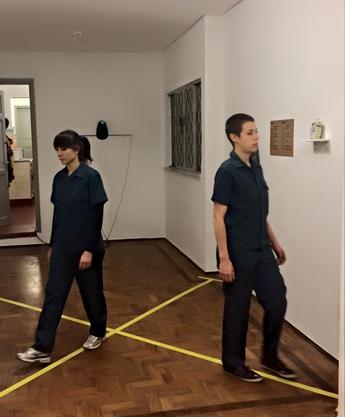 Two performers wearing workers jumpsuit cross, with five steps, and come back, the diagonal of a limited space during two shifts of eight hours. They followed a timesheet that determines pauses and working hours, and take notes of each others delays and infractions, giving them warnings.

“five steps, pause, five steps pause,” was a performance by Elen Braga and Raphaela Melsohn developed specifically to the exhibition “may first” that occurred for 24h in a house in São Paulo, Brazil, on 05/01/2015. The two performers, wearing worker’s jumpsuits, crossed a limited space that had five steps of diameter, and came back to the initial point with the same five steps, during two working shifts of 8 hours each, considering a four hour break between them. They followed an alarm and a timesheet, that determined pauses, and working time, taking notes of delays and infractions, and giving warnings to each other.